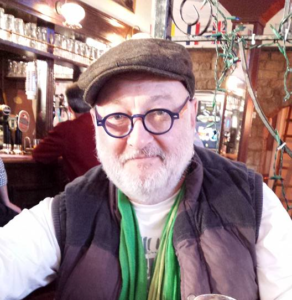 Born in 1955 (3rd April to be exact) in Streatham, South London I went to Furzedown Infants and Penwortham Junior schools. My father died of cancer in 1964 and I was given the opportunity to attend Christ’s Hospital, which I did from 1966 to 1973 ending up with 11 ‘O’ levels and 3 ‘A’ levels (would have been 4 but I got glandular fever and refused a “judgement award”). Thanks to a young maths master we were introduced to programming between the maths and additional maths O levels – Fortran by post!

Whilst at CH I was a member of the CCF and got my glider A and B certificates and did 30 hours powered flight including solos. I won an RAF scholorship and was sent to the University of Essex to study TV and Radio Engineering. After getting there switching to Computer and Communications Engineering in which I got a BA 2ii (Hons).

My RAF career ended when I resigned after completing Officer Training at RAFC Cranwell and just prior to jet conversion. I was warned that I might owe the MoD up to £750,000 (1970’s prices) but in the end the bill came to £1,500 payable over 5 years interest free. Not a bad deal. I had just fallen out of love with the institutional life and didn’t want any future wife to be a “dependent” – which is how the forces saw them.

Since giving up flying I have been largely involved in web development, acting and writing.

I am married to Fran and we work together on UK Theatre Web where she does the UK-wide listings; a phenomenal feat. I have two step-daughters, a step-granddaughter and two step-grandsons as well as four Tonkinese cats and too much to do in my spare time!