I wrote my first program in 1969 during a lull between taking my Maths ‘O Level’ and my Additional Maths ‘O Level’. We had a young teacher who had tried computing at Imperial College and he made an arrangement for us to be able to send programs (“programmes” in those days) to their cafateria service! We were taught Fortran and wrote our programs on 80 column cards with push-out holes then posted them off and, a week later, got back our line-printer paper. My first job title (computer not employment) was “Cucumber Patch” and was a Fortran program to draw sine and cosine curves on line printer output.

Since then I have programmed in many things from wire and solder to fourth generation languages (where did they go!) and worked on missile guidance in 64bit microcode, assemblers and a DOS in machine code, many things in assembler and spent time in the worlds of Algol, Coral, Basic, Fortran, ASP, PHP, Perl, Prolog, Javascript and LISP (shudder) … well, anything that came along though some would say I’m simply a multi-lingual Fortran programmer. I was still there when Fortran 2000 came out and was a founder of the Fortran Futures meetings, I’ve worked on the ISO standards committee and Fortran based web (and gopher!) sites and even compilers and tools (Toolpack, that was largely my area).

In late 1977 I joined Marconi Space and Defence Systems as a development engineer working on embedded computers for air-to-air guided missiles. Our 2901-based bit-slice processor had a cycle time of 210 nSec and a 5watt parallel multiplier chip making it capable of real-time discrete Fourier transforms on radar data. We designed and built our own 64-bit microcode and I developed and programmed an assembler for it all. I moved within the company to running an HP1000 based test rig designing IEEE488 interfaces, disk operating systems and the like – in assembler and Fortran.

After a few years with MSDS I applied for a job developing Fortran tools at NAG Ltd in Oxford. I spent 14 years there ending up as a Divisional Manager in charge of the Software Environments Division; tools, compilers, visualisation (Iris Explorer), graphical, symbolic and expert systems – essentially everything that was not a library!

Whilst At NAG I joined this wild and crazy internet revolution (1984) with a login at Oxford and one in Chicago. Email on a 300baud teletype is not fun and having to manually route via Goonhilly was a pain but we got by and even ran international collaborative projects. By the late 80’s the 100 or so of us at NAG were sharing a couple of 64Kb lines and thought we were the bees knees. I eventually created the company Gopher/Web services and started exploring its possibilities – I remember at the time saying that “one day you will even see web addresses on carrier bags” but people thought me mad.

In the end, as my thirst for the web outstripped my employer’s interest, I left to become Programme Manager for a web development company called Domino Systems working for clients such as Dell (Europe), Lloyds, Subaru and SmithKline Beecham.

In the end, however, I bit the bullet and left Domino to be independent; relying on theatre listings and web consultancy to make a living.

Along the way I have also been a system manager for a range of systems; various shades of both Linux and Unix (including SunOS, Irix, NeXT Step), VMS, HP RTE and Windows Server. I have had my own racks in London and specified, configured, installed and maintained a wide range of stand-alone and rack mounted servers and services. I still provide hosting (shared and hybrid), DNS, email and bulk email services for most of my clients and am a reseller for Heart Internet hosting services and Active Campaign newsletter management. 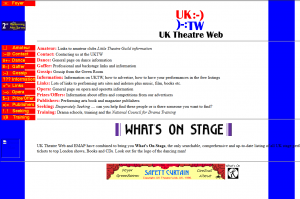 My wife and I started UK Theatre Web (UKTW) in February 1995 but had been delivering on-line what’s on services for a number of months by then using both Gopher and World Wide Web servers. In fact, we pre-date services such as the Internet Archive (WayBackMachine) which first picked us up in 1996 (don’t laugh!) by which time we had started supplying Whatsonstage.com with listings and technical services.

The internet UK Theatre Database (iUKTDb – previously known as Arts Archive) is where all of the listings from UK Theatre Web end up when they expire.

I went on to develop content management systems for web clients and work with more established systems such as WordPress.