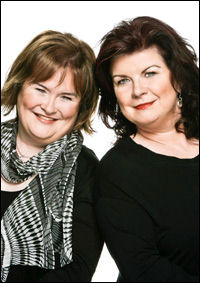 The forthcoming musical I Dreamed a Dream which looks at the life story of Susan Boyle is to tour the UK  for eleven weeks from March 2012 – details of the tour and tickets are on SeatChoice.

Elaine C Smith, who famously played Mary Doll in the TV comedy programme Rab C Nesbitt and who appeared in the West End Calendar Girls, actually plays Susan Boyle in the musical but Susan herself will appear in the finale – this is her first musical and will be the first time to see her on stage since 2009 (Britain’s G

“I am happy that the musical is being produced” says Susan, “I never thought my life story would end up on the stage but a lot has happened in two years and it is a very exciting prospect. I hope everyone enjoys the show and I promise there will be a few surprises along the way.” Susan also described the process of developing the musical as “cathartic” adding that the story is an honest portrayal of her life.

The tour will include Newcastle, Aberdeen, Bradford, Liverpool, Dublin, Bristol, Southend, Cardiff, Birmingham, Inverness and Manchester. I Dreamed a Dream is, of course, the song from Les Miserables that made her famous when she sang it on TVs “Britain’s Got Talent”.