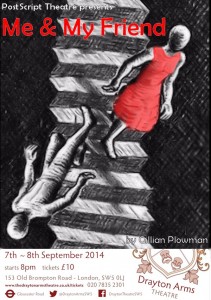 PostScript Theatre will be performing Gillian Plowman‘s award-winning one-act play Me & My Friend at the Drayton Arms Theatre at the end of November (originally scheduled for September).

A black comedy, the play explores the relationship between two ‘odd’ couples thrown prematurely out of hospital care. In the downstairs flat are Oz, who has never recovered from his mother’s death, and Bunny, whose workaholism led to estrangement from his wife. Upstairs are Robin, a middle-class housewife who suffocated her own son, and Julia whose obsessive thoughts of men drew her into prostitution. In the first act we see the men conduct fantasy interviews for jobs they will never get, then in the second act, the women trying to make plans for a holiday. They all meet when Oz throws a disastrous party with the four desperately attempting the niceties of social intercourse.