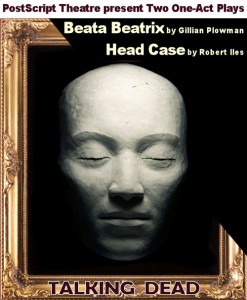 PostScript Theatre are now rehearsing Gillian Plowman’s Beata Beatrix and my Head Case for performance in London during December and Bristol next January. The evening of two one-act plays is being titled “Talking Dead”, a bit like “Talking Heads” but different!

Beata Beatrix
On a guided tour of an art gallery, Beatrice notices a lone man, Jon, crying in front of a painting. She knows the tragic story behind the painting: the painter’s wife killed herself because he was unfaithful, and in remorse he painted her in a heavenly repose. Beatrice offers help, and it transpires that, for Jon, whose wife died of leukaemia while he was with another woman, the painting tells his own story. His guilt makes life no longer worth living. Beatrice, though, has her own haunting secret and through their awkward attempts at understanding, the pair develop a rapport and improvise a touching scene between the painter and his model, to the amazement of startled tourists. Their salvation comes in the form of their new love …

Head Case
Whilst performing a facial reconstruction on a skull from a police cold case, a blind sculptress finds herself in a conversation with an intruder into her flat – is the stranger a real threat? The play has been updated for this production.