I was never a runner, not even when I was young. Well, not quite true, I was a sprinter but after 100yds I started to fade fast and running for its own sake never appealed to me. I went from one of the fastest in the school to just ordinary when they changed from 100yds to 100m! Fran does run, well, and regularly – my involvement so far has been to cheer her on and to marshal at some of the local events.

A quick side point here; for a local 5K most runners are out for 40 minutes, the marshals can be out for 5 or 6 hours and walk the course at least twice, usually carrying equipment and have cheered and clapped all of you as you pass. So remember to love your marshals!

I did run the fun mile a few years ago and surprised myself (and others) by not stopping or walking despite having done no prior training. I also walked the Alzheimer’s 10K in Cardiff last year. Then this year, at the end of the London Vitality 10K, my darling Diane said “anyone can do a 10k, if you can walk it then you can sign up for a race”. I must admit, I had quite a few times stood near the end of a race watching the people coming through and seen plenty of people older, fatter, slower, less fit than me making it to the end and felt a bit ashamed.

So I signed up for the 2017 London Vitality 10K – well, it was 10 months away so why not, I could surely make it by then. First surprise – how supportive fit people can be! I got a real boost from the encouragement of people who can regularly run a marathon, even an Iron Man. They didn’t care that I couldn’t make a couple of miles, or ran at walking speed, they just wanted to congratulate me on starting! And there was the second surprise – its not a competition, each to their own pace and their own targets. Hmm, I thought, maybe I can. To the usual maxim of “no pain, no gain” I added “no shame, big gain”; make your own targets, don’t try to meet other people’s.

Usually, if I try any regime, I quickly manage to find some reason to stop; too busy, too painful, its raining, I can’t keep up. This time I was determined to work by myself so I could find my own pace.

I started with the BBC “Couch to 5K” plan, choosing Sarah Millican’s voice to spur me on. This is a 9 week plan that aims to get you running for 30 minutes without a break (which is not 5K for me!) and which starts very slowly. The first week was barely running at all, 90 seconds with a walk in between. I was exhausted. My legs were agony. The 10K target seemed to be receding quite literally into the distance! But I kept going. Three runs a week as the training demanded. It’s a great programme if you need to get started yourself.

Then about 3 weeks in, I slowed from one of the running segments and found I couldn’t walk. My leg hurt so badly I had to hobble back. I had badly pulled a muscle deep inside my calf and for a week could hardly move it. Strangely I could run, but walking and stairs were pure agony for a while till it calmed down. Turning quickly one day it pulled again, more agony for a few days though I kept running on it. Then we had a week off to do the Edinburgh Fringe which involves a lot of walking and part way through the week it pulled again and I was hopping and hobbling all over the place.

I still found I could run though and about 7 weeks after starting I decided to give 30 minutes a try and managed it – 36 minutes running without a break – the longest I had done in near 40 years. It wasn’t fast and it wasn’t far but I had finally found a pace at which my body was comfortable and confident. As everyone says, “it’s all in the mind” – set your mind to a target and let it find the pace that will meet it. I ditched the BBC programme and went off piste.

A couple of trips to a sports injury person, some strapping, a week of rest, exercises and contrast bathing and I got the all clear to try again. Gently. I interpreted “gently” as “let’s see what I can do” and went out and did 4k, then 7k and finally 10k in the same week! The 10k really hurt so I determined to pull back from that and went back to short runs for a week. But in my head I now knew that a 10k was possible – I ran the whole way without walking, slowing or stopping, at my own pace and in my own space. 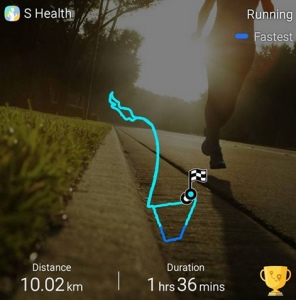 I am not a good runner, but I am a runner. I have started to feed in beach running and hills, I am slowly increasing pace and I am running three times a week for one to one and a half hours a time. All this after 40 years barely doing anything energetic and in barely 14 weeks. My breathing is better (good for our diving), my heart rate is lower and I’m starting to lose weight. Gosh, talk about win-win!

I now know that the first 1K is hell until my pace and breathing settle and the first 2.5k hurt my legs really badly but then I seem to settle down, pain goes, breathing stabilises, I feel like I could go on for hours. Ok, this probably means I am not pushing myself enough but slowly, slowly does it, the biggest challenge is actually not giving up and so far I am meeting that head on! Oh, and I’m pretty good at estimating distances, I get back to the front door within a few yards of my target distance – now there’s a thing!

I am now signed up for two 10k races, Weston’s Christmas Cracker in December and the London Vitality 10K next May. I am running regularly and enjoying it. I honestly never thought I would say that!