On Christmas Eve 2016, with the dinner in the oven (we eat Christmas dinner on Christmas Eve) and our guests all getting generally merry, I went out to find Orlando our beautiful boy Tonkinese so that he didn’t miss the fun. Eventually I did find him, two streets away killed by a car, and our world fell apart.

A tragedy, a year and a day after my Mum died – it just seemed so unfair. Orlando was the most beautiful of boys (you can read about him elsewhere in this blog) he was known far and wide and very loved. He travelled with us everywhere, kept us entertained (and awake!) and was a core part of our family. We both work from home and so spent up to 20 hours a day in direct contact with Orlando and his sister Clicquot – the hole left by his death was, and still is, huge and nearly two years later we are still mourning his loss.

But even on the day he died we knew we had to get another cat, partly for us but also for Clicquot. Tonkinese like company and the loss of Orlando changed Clicquot and made her more dependent on us – to be honest, it also made us too dependent on her which was not a good thing. 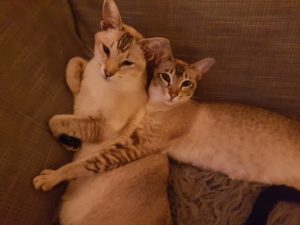 What we didn’t know, but found out pretty quickly, was that Tonkinese are pretty hard to get hold of. We contacted everyone on the breeder register and got a few “we can add you to the waiting list” responses and eventually found someone with a kitten in Southampton … only when we contacted them it turned out they were in Ireland and we couldn’t see the cat but they would courier it to us for £200. Really? We weren’t that desperate and quickly cut that communication short.

Our next knock back was that we were taken off some lists as we let our cats roam free and some breeders do not like that. It made us assess what we were doing and in the end, despite our feeling that cats should be free, we decided to enclose our garden using ProtectaPet fencing which I added, building them some climbing frames at the same time. Clicquot, who had always been free to roam, to a little while to adjust but didn’t seem over stressed by the change at the time. 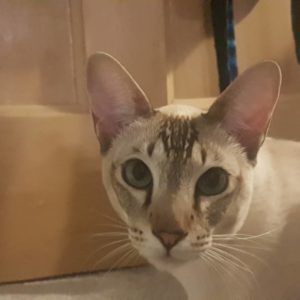 We then managed to find a breeder in Chesterfield with a litter of F1 (first generation) Tonks coming up who really felt for our story and added us to her list. We went and met her and after that were moved to the top of her list – we must have made an impression. The dame had one of her sons still with her, Seth, and he was a marvelous cat so we were happy. When the dame gave birth, however, she had only one kitten, very rare, but we took him: Malvolio therefore joined us as soon as he was able. He is a glorious cat, beautiful and big but clearly got used to being an only kitten! 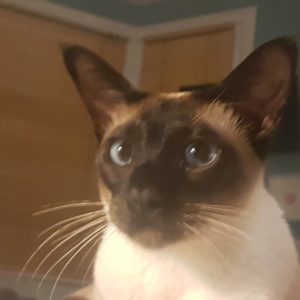 Meanwhile we found another breeder in Kent who we went to meet, selecting two lovely little kittens just born. When that dame had given birth there were quite a few kittens but 7 days later the dame died of a heart problem and the kittens had to be raised by hand – bless the breeder for managing it as it was a mammoth job that the vet doubted would work. Well it did and our kittens survived but when we went to collect them they were so very tiny that the breeder offered to let us have others instead – oh no, we said, we were committed to them already. And so Tybalt and Tsarine joined us. Tsarine is still tiny and always will be but Tybalt has become quite chunky and is the most loving cat you could wish for.

All the cats have now got used to travelling to Newquay with us for “holidays” at their other home – also protected by ProtectaPet fencing, and don’t seem that interested in the world outside our homes and gardens.

So, two years after we lost Orlando our Tonk family is settled and happy – we still miss our boy terribly but there is so much love from these four that i makes up for most of it.