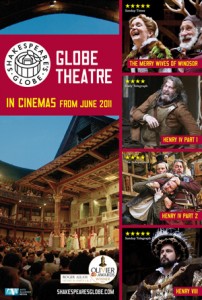 Coming to cinemas from June this year, experience Shakespeare’s Globe as if you are there — front row and intense. Four plays, captured during 2010’s ‘Kings and Rogues’ season feature in the series, including Dominic Dromgoole’s acclaimed production Henry IV Part 1 with Roger Allam’s Olivier Award-winning performance as Falstaff.

As part of Shakespeare on Screen, Henry IV Part 1 will hit over 50 UK cinemas on 25th July and over 275 cinemas in the USA on 1st August.

Henry IV Part 2 and Henry VIII will follow later in the year.