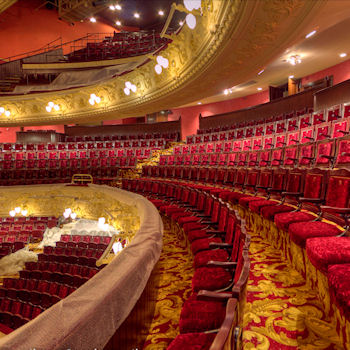 In 1901 Newcastle’s Theatre Royal, which replaced an earlier building was one of the great Frank Matcham venues – sumptuous and, for its age, at the forefront of theatre design. But the years had not proved kind until, in preparation for the venues 175th birthday (2012) , it was decided to restore the Grade 1 listed building to its former glory.

Six months and £4.9million later the theatre is ready to retake its position as “the glory of Grey Street”, or as it has been known “The greatest building on Britain’s greatest street”! Five hundred workmen including specialist craftsmen from across Europe, have recreated the original design from carpets to brasswork, light fittings to wallpaper, lost tilework to ornate gold-leaf plasterwork using photographs and catalogues from the time – but with a twenty first century eye on improved energy efficiency.

David Wilmore, a theatre consultant and Matcham expert who has advised the project said: “This is the biggest and most meticulous theatre restoration I have ever worked on – no other I’m aware of has been as meticulously researched and recreated.  Because we know far more about Frank Matcham than ever before, and understand how great a genius of theatre design and the audience experience he was, we have been able to achieve a bespoke reconstruction, and the level of detail is extreme”. He went on to say ” Nothing is ‘off-the-shelf’ here, everything has been bespoke-made using traditional techniques, and for that reason the project signifies a fundamental shift in how we approach conservation in the 21st century. 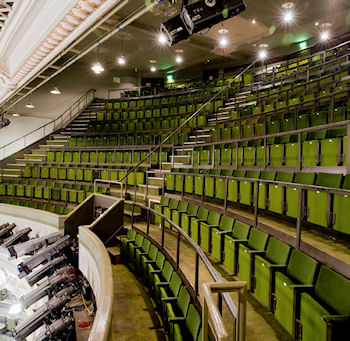 Restoration has been done of both the inside and outside of the theatre; seats are more comfortable, two luxury boxes and a new amphitheatre have been added and air conditioning, technical and lighting areas have also been improved. Some 16% of the auditorium is covered in gold leaf, 37,000 pieces of it!

The Theatre will reopen to the public on Monday with Alan Bennett’s spectacular five-star reviewed period drama The Madness of George III (12 – 17 Sep).  It will be the first show to be performed in the Theatre for over six months.