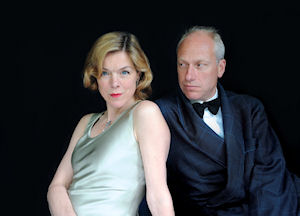 In Coward’s 1930’s comedy, two honeymooning couples share adjacent rooms in a smart hotel in a fashionable French hotel. But there’s a problem. Two of those involved were married before. To each other. When they meet again, they throw themselves into a love affair without a care for the scandalous consequences and run off together to an apartment in Paris. Elyot and Amanda’s stormy relationship reaches its climax as their new partners track them down and walk in on them.

This production with design by Dawn Allsopp and lighting design by Alexandra Stafford will also star Victoria Yeates, Marcus Hutton and Debra Stewart.

Details of Private Lives on SeatChoice

What an Autumn of families on stage this is turning out to be, what with Charlie Bewley and his  sister Lydia Rose Bewley appearing at the Jermyn Street Theatre in The River Line and the Taylforth sisters planning to tour together.