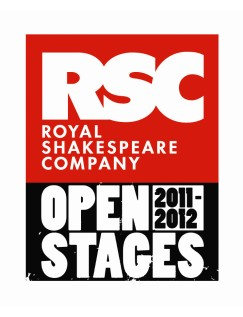 I went to see one of the Open Stages showcases at The Courtyard in Stratford-upon-Avon last night. We were treated to eleven extracts from past, current and future productions that had been involved with the Open Stages project and what an interesting insight it was.

This particular showcase concerned itself with plays and musicals “derived from Shakespeare’s work” rather than the plays themselves and included a range of styles.

In the first half we had some of Stoppard’s “Rosencrantz and Guildenstern are Dead”, a bit of Terry Pratchett’s “Wyrd Sisters” and some pieces based (mostly) on A Midsummer Night’s Dream and A Winter’s Tale. The local youth group, Rogues and Vagabonds, musical numbers were particularly enjoyable (did they understand all the lyrics I wonder?!).

The second half, however, was much stronger and was kicked off by the RAF Theatrical Association with an extract from their recent “Return to the Forbidden Planet”. I particularly enjoyed the Standby Theatre’s “Lovers and Mad Men”, this group is made up of RSC front-of-house staff proving that the house talent goes deeper than just the acting company. Tread the Board Theatre Company rounded the evening off with an extract from The Complete Works of William Shakespeare (abridged) – fabulous fun.

The Open Stages project has involved nearly 7,000 amateur performers across the UK, providing them with guidance, workshops and a platform for their talents … to my mind its been a very successful programme that I hope is repeated often.