Well, we just got the call and Head Case has been invited to be performed at the 40th British All Winners Festival.

Each year, the British All Winners Festival showcases the very best of British amateur theatre in a week-long celebration of theatre. Drama Groups which have won Full Length or One Act Member Festivals during the preceding 12 months are eligible for invitation by the NDFA to take part. We won the AAD festival last February. This year, 2013, is the 40th such festival and it is a great privilege to be invited to take Head Case there.

The festival takes place at Teignouth’s Carlton Theatre between 7th and 13th July – not much warning to allow us to resurrect a production from last Feb but we’ll manage it.

This is the second year in a row that we have been invited to the BAWF as last year we took our play Towpath. When working with Flat Four a  few years ago we often got to, and even won, the BAWF but nowadays I’m happy just to be invited … not that I think competitive drama should be taken too seriously as it is the audience we should be seeking to entertain not the adjudicator. 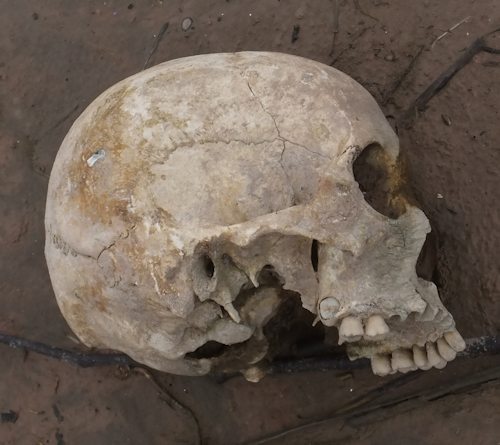 A curious piece of background for this year’s play – whilst my wife and I were on holiday in China last month we took a short Yangtze cruise and, on returning to the boat fro a short excursion, I actually did find a skull, a human skull, on the mudbanks of the river. The locals refused to believe it when we reported it but as the boat pulled away again we saw the police in attendance – Real life is like a play sometimes!