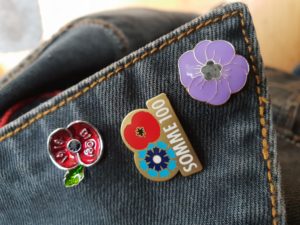 This year’s poppy, the Somme 100 with the French cornflower and the purple poppy for animals lost in conflict.

My wife and I have always been drawn to the history of the First World War. A good few years ago we were in Northern France and visited some of the cemeteries and sites of the battles and found we were deeply moved when confronted with the enormity of the conflict and how current it is in the lives of many people, especially in Belgium and France. In the UK we have Remembrance Day and pretty well every village and older public building, even our local Post Sorting office, has a plaque to those who lost their lives. We have been again with friends and will go again next year – staying in Ypres, visiting the battlefields, museums and cemeteries and showing our respect to the millions of young men and women, and the animals, especially horses, killed and damaged by that conflict.

We find Ypres a particularly good base. The town was completely destroyed in the conflict but rebuilt as a “replica” of the original town – you really can’t tell it isn’t extremely old. The food and drink are excellent and there are plenty of tours and walks around the town and the salient. But what amazes most is the Menin Gate and the Last Post. Every day the Last Post is played, every day the Menin Gate is full of those, young and old, showing their respect. The First World War is part of the heartbeat of the people of this region in a way it is not in the UK. It is an incredibly moving experience.

Take one of the battlefield tours if you can, see Harry Patch’s (restored) memorial to his comrades, Vimy Ridge, the Hill 62 Museum, and other sites and learn something of how it still affects the daily lives of farmers who every week find unexploded shells in their fields and put them to one side for the bomb disposal teams. Bits of the dead are still being discovered and are treated with full respect – identified if possible and reburied with honour – and the Commonwealth Cemeteries are maintained at a very high standard. Try to visit some of the smaller, remote Commonwealth Cemeteries, some with a dozen or so dead buried where they fell, you may have to walk through the mud and feel it stick to your shoes and weight down you feet. If possible, find a relative, or a friend’s relative, who died in the conflict and trace them – one story is easier to follow than millions and makes a more immediate connection.

, a book which noted that “By the late twentieth century, history’s most violent period had claimed over a hundred million man-made deaths” and asked the how and why questions. More importantly to me it gave me a way to get some grasp on these deaths by reducing the mass slaughter of, for example, the trenches, to the story of one person. Using the same technique, we returned from a trip to the battlefields with a large Ypres’ Cat (they are famous for their cats) which we named “Thomas Barrett” after a soldier of 22 years who is buried in Essex Farm Cemetery near to Valentine, the youngest British casualty, dead at 15. This is also where John McCrae wrote “In Flanders Fields” a poem often used to show the futility of war and on which the Poppy symbol is based, but which, in its last verse, urges us all to take up the struggle on behalf of the dead.

Thomas Barrett won the VC for his bravery, reported in the London Gazette, “On 27 July 1917 north of Ypres, Belgium: For most conspicuous bravery when as Scout to a patrol he worked his way towards the enemy line with the greatest gallantry and determination, in spite of continuous fire from hostile snipers at close range. These snipers he stalked and killed. Later his patrol was similarly held up, and again he disposed of the snipers. When during the subsequent withdrawal of the patrol it was observed that a party of the enemy were endeavouring to outflank them, Private Barratt at once volunteered to cover the retirement, and this he succeeded in accomplishing. His accurate shooting caused many casualties to the enemy, and prevented their advance. Throughout the enterprise he was under heavy machine gun and rifle fire, and his splendid example of coolness and daring was beyond all praise. After safely regaining our lines this gallant soldier was killed by a shell.” 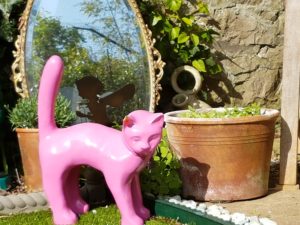 The cat, with copy VC around his neck, is visible from our kitchen window. We may not remember them at the going down of every sun but we are regularly reminded of their sacrifice through this one, brave, young man.

A few years ago we also visited Gallipoli where my step-Grandfather had been in the ANZAC forces. This is a fascinating area and well worth taking one of the professional guides who can show you the layout of the land and talk you through the battles and the amazing personalities and stories of this conflict – a conflict seriously misunderstood as the narrative I was brought up with simply doesn’t match the terrain and historical documents of reality.

A side note. I had always wondered about the state of the cemeteries in Northern Europe, both Allied and German. How, I had wondered, did they survive the Second World War when those lands were occupied by the Germans? The Allied and Commonwealth cemeteries contained the memorials to their enemy and the German cemeteries contained Jewish dead with Star of David headstones as well as mass graves associated with being on the losing side (their use of land for their dead was restricted). Well, on our last visit, whilst in Ypres, I learned the curious truth. It was a direct, personal, command from Hitler (in which he had fought) that there was to be no damage done, no lack of respect shown, to the dead of the previous conflict whichever side they had fought on – the command was respected and the cemeteries and memorials remain.

And so, one hundred years on, they are remembered.